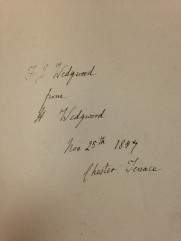 While researching the recent anatomy book display I came across an item which we library staff got a bit excited about, Anatomical studies of the bones and muscles : for the use of artists / from drawings by the late John Flaxman … engraved by Henry Landseer; with two additional plates; and explanatory notes, by William Robertson (STORE 195:41). Written on the flyleaf at the front on the book is the name Wedgwood. Now, anyone who has any Charles Darwin knowledge (and working at the Whipple means that I have absorbed a little bit) knows about the Wedgwood family. So, are these members of that family? A quick email to the Darwin Correspondence Project got a speedy response: the Wedgwood’s in question were indeed of “The Wedgwood’s”, Hensleigh Wedgwood, Emma Darwin’s brother, and his daughter Frances Julia Wedgwood.

Hensleigh Wedgwood (1803–91) was the grandson of Josiah Wedgwood (1730-1795), the master potter. He became police magistrate at Union Hall, Southwark in 1831, but resigned 6 years later as he “was convinced that the administration of oaths was inconsistent with the commands of the New Testament” [1]. He then became registrar of metropolitan carriages where he licensed hackney carriage drivers and conductors. Hensleigh became a scholar after leaving this job in 1850, turning his attention to the study of language and philology. He also became interested in a subject that I seem to keep going back to, spiritualism. He held séances and “served as a founding member of the Society for Psychical research in the 1880’s”[2]. Browne states that Charles Darwin and Thomas Henry Huxley “gave in to Hensleigh’s urgings”[3] and in 1874 attended a séance in Erasmus Darwin’s house alongside Hensleigh, his eldest daughter Julia, Francis Galton, George Eliot, and others.  Julia, who is the recipient of the Flaxman book, is noted by Harris to have had a strong spiritual and mystical streak.

(Frances) Julia Wedgwood (1833–1913) was a novelist, biographer and literary critic. The family gave her the pet name of Snow as she was born during a violent snowstorm.  The page about her on the Darwin Correspondence Project website says she was “considered one of the great female intellects, beneath only George Eliot, as far as her ability to handle ‘masculine subjects’ and modern topics.”[4]  She taught herself Latin, Greek, French and German despite suffering from deafness for much of her life.  As well as her intellectual achievements Julia still took on the more traditional roles of a Victorian woman. She cared for her various nieces and nephews, and her sick and old relatives. Julia seems to have had a somewhat difficult relationship with her father, according to Harris “In 1889 she gave up her own house to care for her widowed father, who had spent the previous fifty-six years ignoring or disparaging her talents”[5].

Anatomical studies of the bones and muscles does have more to connect it to the Wedgwoods than just a gift from one family member to another. John Flaxman (1755-1826) was an illustrator and sculptor who worked at one time for the Wedgwood factory, as did his father. While at the factory he designed medallions of contemporary luminaries and  reliefs for vases and plaques. He also enjoyed illustrating classical texts and was commisioned to provide outline illustrations for Homer and Dante. Flaxman is more famously known for his sculpture which included funerary monuments. He made the momument for Josiah Wedgwood (1730-1795) in St Peter ad Vincula, Stoke-on-Trent’s parish church and the momument for Lord Nelson in St Paul’s Cathedral. In 1810 Flaxman was made the first Professor of Sculpture by the Royal Academy.

Although there is a nice connection between the Wedgwoods and Flaxman, there seems to be nothing that links them to the other people repsonsible for the book. Henry Landseer bears the surname of a famous artist family but doesn’t seem to be related.  A few catalogue records for copies of Anatomical studies held by other libraries have him living around 1810. Little is also known about William Robertson. Again records held by other libraries say he lived around 1833 and was an editor, draughtsman, lithographer, and anatomical writer.

The book is a wonderful example of artistic anatomy. The Royal Academy of Arts have a very detailed catalogue record for their copy which is worth a look at for a more detailed description of the book’s content. Many art teachers at the time thought that students needed to study anatomy to fully understand the human body, therefore creating better works of art. 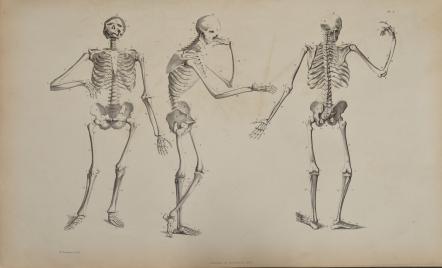 Drawing by Flaxman, engraved by Lanseer 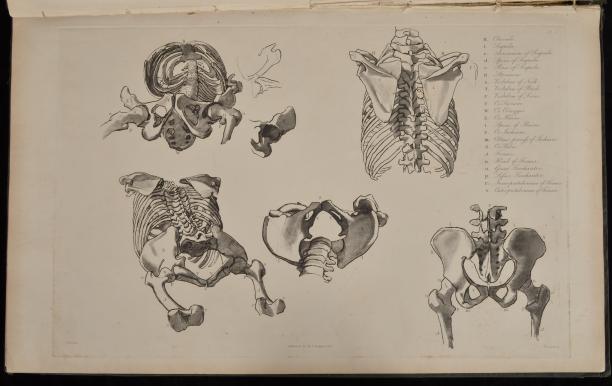 Drawing by Flaxman, engraved by Landseer

Thanks to Rosy Clarkson at the Darwin Correspondence Project for the information about the inscription.

This site uses Akismet to reduce spam. Learn how your comment data is processed.